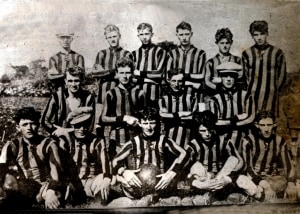 The period between 1915 and 1925 was a period of turmoil in Ireland starting with the Easter Rising in 1916. A company of Volunteers was formed in Kilmihil in 1917 and the focus of attention became the struggle for Independence.  In April 1920 an attack was carried out outside the Church resulting in the death of an R.I.C. officer, his colleagues returned fire and John Breen, an Adjutant in the Kilmihil Company was killed. A Monument was subsequently erected outside the Community Centre to the memory of John Breen. The War of Independence was followed by the Civil War and economically times were tough.

The major problem with football during that time in Kilmihil was that there was no official training field.  Players would gather in a field without the permission of the owner and very often they were interrupted when the owner would appear and order them to leave.

During the War of Independence there were constant interruptions from the Black & Tans.

In early 1925 a number of meetings were held and it was clear that there was a considerable level of support within the parish. Timmy Fitzpatrick was the driving force behind the team, he was appointed as Coach, Captain and general organiser. He also provided his field free gratis for practice.

It was decided that the team should be properly kitted out and in this regard a number of fundraising dances were held to raise funds and a collection was taken up on a Fair Day.

When enough money was collected Jerseys, togs, socks and boots were purchased.  Kilkenny were the All Ireland Hurling Champions that year so it was decided that the Kilmihil team should be as well dressed as the All Ireland Champions and so the first official colours of the club were Black & Amber.

The first game was against Kilrush and Kilmihil were victorious. There was great interest in the parish and football was the topic of conversation at every gathering. The team sporting the Black & Amber marched to Cooraclare which was the venue for the game against Miltown Malbay. The score at half time was:  Kilmihil 0-1    Miltown 0-1

On the resumption the jubilant Miltown side were confident that they would achieve victory  by a good margin, but their efforts to bring off the necessary scores were frustrated by the solid and rock-like defence of the Kilmihil back line, as attack after attack was repulsed and play swung to both ends of the field. A free to Kilmihil, nearing the end of the second half, found its way to the sure and steady hands of Sergeant J. Clarke, who sent it over the bar, to notch the winning point, to the great admiration of the jubilant Kilmihil supporters.

Miltown lodged an objection on the grounds that Kilmihil had an illegal player who played with Kilrush in 1924. Kilmihil admitted that the player in question had not been properly registered but pleaded that they were a young team and following some discussion Miltown withdrew their objection.

Kilmihil’s next engagement was against Kilmurry Ibrickane and the match was played at the Cricket Field, Kilrush. Kilmihil won this encounter by two points. This victory helped to boost the morale of the team, and hopes of winning the Co. Championship were high. There was much speculation as to where the final would be played and there was great joy when the Co. Board fixed the game for the home venue. Kilmihil would now be playing hosts to near neighbours and old rivals, Cooraclare.  The final was played in James Reidy’s field in Clonakilla and was refereed by Tom Haugh of Coolmeen Club. It was the rule in the early days that eight players from each side should line out at midfield for the throw-in at the start of the game. This heralded the start of the game. There were loud cheers when J. Clarke scored a goal for Kilmihil. Play swung to the other end of the pitch and a defensive error on the part of Kilmihil full-back line, led to a goal for Cooraclare scored by Randal Kelly.

On the resumption Kilmihil threw everything into the game, they were faster to the ball and their forwards were combining well. A high kick from centre-field was caught by the unmarked Tommy Quinlivan who promptly found the Cooraclare net. From then to the final whistle play was rather robust, and a melee on the Kilmihil goalmouth looked very dangerous, but thanks to their cool and reliable Culbaire, P.D. O’Sullivan a very dangerous situation was averted, and a long clearance out field brought much relief to the hard pressed back-line.  When the final whistle sounded the Kilmihil supporters stormed onto the pitch and carried their heroes off the field.

Kevin and Brendan Lillis were brothers of Kieran.