As a result of winning the Senior Championship in 1980 Kilmihil represented the county in the Munster Club Championship and their opponents were St. Finbar’s.

In May Kilmihil were beaten in the Semi-Final of the Aberdeen Arms Cup by Miltown Malbay, the score was 2-9 to 1-2.

Our next opponents were Michael Cusack’s in the quarter final and Kilmihil won easily, 3-7 to 0-7.

On 9th August Kilmihil met Kilkee in the Semi-Final. This was a tough battle and Kilkee led at half-time 1-4 to 0-5. Ten minutes into the second half Noel Normoyle levelled the scores but Kilkee showed their determination and finished with 3 unanswered points to leave the final score, Kilkee 1-8  Kilmihil 0-8.

In the U21 Championship Kilmihil were out to retain their title and in the Final their opponents were St. Joseph’s Miltown Malbay. The game was played in Doonbeg and it ended in a draw, Kilmihil 0-5 Miltown Malbay 1-2.  Best for Kilmihil were Stan Lineen, Pat Garry, Noel Normoyle, John Moran, Kieran Normoyle and John Hayes. 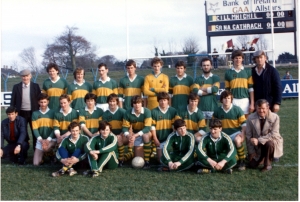 The second replay took place at Cusack Park on 8th November and at half time the sides were still deadlocked after playing for a total of three hours. Shortly after half-time captain Pat Garry got injured but he was determined to play on so he moved to the full forward position. This proved to be the turning point when he was pulled down and Colm Collins made no mistake with the resulting penalty.

In the 16th minute Pat Garry sealed the victory when he scored the second goal and there was no way back for Miltown after that.

The Man-of-the-Match award was presented to Noel Normoyle for his performance.