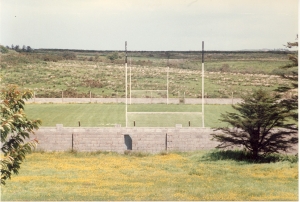 In the Clare Champion of 19th September 1959 there was a heading which read:

This was the culmination of many years of hard work, and was surely a proud day for the parish in general and the Football Club in particular.

Willie Longworth recalled that about 1938 he was approached by Fr. O’Connor and Timmy Fitzpatrick regarding the purchase of the field. At the time he advised them against it, as the field was a mass of bogdeal sticks, bog-holes, hills and hallows, and he could see no future in it as a football field. However the men were not to be put off, and they agreed to lease the field for 999 years at £12 per year.

A committee was formed to raise funds and organise work and workers.

According to Murt Kelly the Committee members were drawn from the other clubs in the parish at the time, two representatives from every club.

Six full-time workers were employed, namely: Thomas Carthy, Stephen Murray, Jack Hehir, Jim Gorman, Paddy Walton and Mick Quinlivan. Their first task was to make a road. There was already an existing roadway leading from Willie Longworth’s gate to the back of Martin McAuliffe’s house (Gregory Fitzgerald’s). This they extended to the football field. Drainage of the field began about 1942, a lot of which was done by voluntary labour. Apparently the whole area was at one time a forest, as tree trunks and sticks stuck out all over the place. Turf too had been cut out of the field so there were bogholes aplenty. This made the idea of a level field hard to imagine.

However, picks and shovels, horses and carts, sweat and labour and determined men removed the roots of bogdeal, and drains were built. Many men helped at this project, but Paddy Walton was the man most associated with the effort.   A hill at the eastern side had to be levelled and loads of earth were drawn into the field. Finally the pitch was enclosed with chain link fencing.

The following is the report of the opening ceremony.

“Kilmihil had its proudest day ever on Sunday, when the local Gaelic Field was blessed by Rev. P.Stuart, Adm., and officially opened by Mr. John Jones, N.T. Chairman of the County Board G.A.A. who named it “St. Michael’s Park”

Over 3,000 people had assembled in this well equipped Park, a tribute to the initiative of the people of Kilmihil, when the official opening ceremonies commenced. Kilrush F.C.A. Pipers played “Faith of our Fathers” prior to the blessing ceremony. The Park looked neat and trim in Sunday’s glorious sunshine, and flags added to the colourful scene. The platform party included Rev. G. Fitzpatrick, C.C. Knockerra; Rev. N. O’Meara, C.C. Kilmihil and Chairman of the local Football Club, Mr. Vincent Murphy, Clare Representative on the Munster G.A.A. Council, Mr. Paddy Hennessy, Vice –Chairman Clare Co. Board, and Mr. W. Longworth, Hon. Secretary Kilmihil G.A.A. Club.  Fr. O’Meara, who presided at the opening ceremonies welcomed the visitors, and said he wished to especially welcome the members of the Co. Board. He understood that Mr. Jones was making his first official visit to Kilmihil that day, and for that reason he wished to extend to him a very hearty welcome. Some people, he said, wanted the Park named after some National or political hero, but the Committee decided to call it “St. Michael’s Park” as St Michael was the Patron Saint of the parish. Already they had a shrine erected in honor of St. Michael in Kilmihil, and it was appropriate to name the Gaelic Park after the same Saint. Even the most carping critic must admit that this football ground was as good as any in Clare. Their guest John Jones has graced Athletic fields as a hurler, and now they were welcoming him to the Clare Football area.

Mr. Jones who spoke in Irish and English, said it was a delightful task to declare this park officially opened. It was his first official visit to Kilmihil, but he hoped to be there many times in the future. He felt that he must congratulate the Kilmihil Gaels for collecting £1,500 by voluntary efforts, for this project. That was the type of noble work that was helping the G.A.A. They would be forever proud to have such a magnificent Park at the disposal of the youth of Kilmihil to enable them to perfect themselves in Gaelic Football, to strengthen their bodies, and to become permeated with the spirit of Archbishop Croke and Michael Cusack, who aimed to make Ireland Gaelic and free. The organising committee must be given the highest praise for what they had done, and it was his pleasant duty that day to name the grounds “St. Michael’s Park” and declare it officially opened.

Rev. Fr. Stuart said he wished to thank everyone who had contributed in any way to the success of the official opening.  Mr. Jones had travelled all the way from Scariff to be with them that day for the first time, and he and the other G.A.A. Officials present were very welcome. Having congratulated the Kilrush F.C.A Band for attending, Fr. Stuart said that they were more than welcome to Kilmihil. It was a proud thing to see that the day had come when such bands as this could wear the Irish uniform, and play Irish National airs. The G.A.A. was, he said, the greatest National organisation in Ireland today. Cusack and Archbishop Croke founded the organisation to further Irish culture and games, and above all, to make the Irish people proud of their great heritage, to be proud and decent Irish men and women, and to have discipline.”

The Cusack Cup Final was played following the official opening and Kilmihil won the Cup for the first time in the history of the Club beating Kilrush on a score of 2-06 to 0-04. 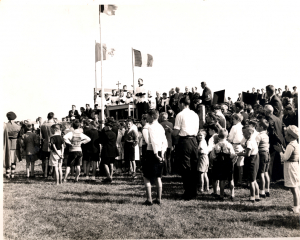 By the early 1970’s the condition of the field had deteriorated, there were no dressing rooms at that stage and there was an open trench where the existing boundary wall with the National School. There were no nets behind the goals so players were constantly retrieving a wet ball from the trench.  The ball in those days was made of leather with an inflated bladder and laced at the opening. When it was dry it was hard to direct it and when it got wet it was heavy and greasy. There were a few raised patches inside the gate and they were the only dry places to tog out. In 1973 the field was drained, resurfaced and re -seeded.

In 1976 the Club purchased two acres adjoining the existing grounds which was converted into a car park.

In 1977 the Park Development Committee was formed with a view to carrying out much needed improvements to the field.

The Members of the Committee were: William Longworth, Frank Saunders, Thomas Downes, Gerard O’Neill & Dan O’Halloran (Snr.). The work included drainage, widening the field and building an embankment where the stand is today. The fence surrounding the field was removed and replaced with a wall. The open drains were closed in and new goalposts were erected.  When the holes were dug to put in the base to hold the goalposts one could see the depth of soil underneath which was bog.

Up to the mid 1970’s it was common practice for teams to tog out behind trees or a hedge as most grounds did not have dressing rooms.  The condition of fields all over west Clare was poor in those days, for Championship semi-Finals or Finals teams would arrive at the venue already togged out and of course there were no showers.

The dressing rooms were built in 1978. All the workers gave their services voluntarily, spearheaded by Martin Murphy and Batt Crowley.

By the mid 80’s the field was in poor condition, the work carried out at that stage involved digging up large stumps of bogdeal and putting in drains.

More drainage work was carried out in the mid 90’s spearheaded by Pat Reidy who put a lot of time and effort into improving the condition of the field.

A decision was made to make the field longer at the lower end and the embankment was pushed back to widen the pitch.  Under the leadership of Michael Normoyle as Club Chairman a committee was formed to take on the task of building the stand and developing the car park. Michael took on the task with enormous energy and dedication and oversaw the transformation of the car park into what it is today, a vital asset to the parish.  The entire project cost in the region of €100,000 however the finance committee under the guidance of Gerard Johnston organised a number of fundraising events and within a few years the entire debt was cleared. 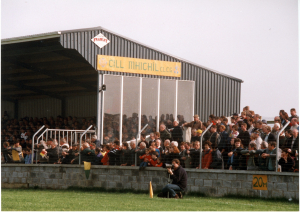 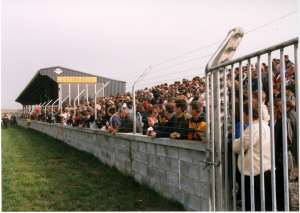 The Club has always been progressive and in more recent years lights were installed, this was done under the Chairmanship of Pat Quinlivan. Once again the finance committee under the leadership of Gerard Johnston insured that the project was paid for in a short period of time.

The most recent project was the construction of the ball wall and astro turf pitch dedicated to the memory of a great Gael, Tom Downes. 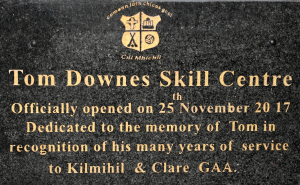 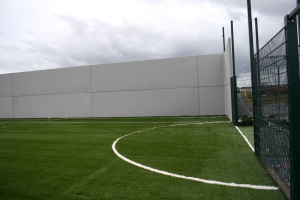 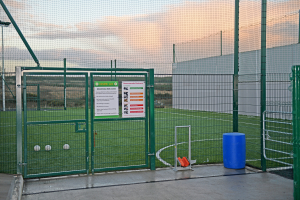