Kilmihil had two major successes in 1977 – the Minor Championship and The Clare Shield.

Kilmihil were the dominant team in the Minor Championship of 1977.

In the first round played in Cusack Park on 11th April they had 15 points to spare over Ennistymon on the score of 3-8 to 0-2.

The second round was played at Kildysart against Wolfe Tones on 23rd July and Kilmihil had an easy victory scoring 4-14 to 0-1.

The Semi-Final was played at Kilrush on 21st August against Kilkee. Two years previously Kilkee had beaten Kilmihil in the U16 Championship and this time round Kilmihil were out for revenge. Such was the determination of the team that Kilkee simply did not get a look in, it was one way traffic all the way. The final score was Kilmihil 2-17, Kilkee – no score . So Kilmihil went into the Final as favourites and possibly with an element of overconfidence. As often happens when a game is hipped up it fails to live up to expectations and so it was on this occasion when Kilmihil met Kilrush in the Final at Doonbeg.

Kilrush had two points on the board before Kilmihil settled down and began a period of domination, however an awkward breeze contributed to several missed chances.

John Moran opened the score with a point in the 9th minute, however while Kilmihil dominated the first half poor shooting left the sides level at 2 points each at half time.

In the final minutes Kilmihil were pressing hard for the winning score and the Kilrush  defence were forced to concede a side-line kick about 21 yards out. The pressure was on Noel Normoyle as he stepped up to take the kick in the dying seconds of the game and his shot hit the top of the cross-bar and landed on top of the net. As the ball was pucked out the sound of the final whistle brought delight to the Kilmihil followers and no doubt disappointment to the Kilrush supporters.

Stan Lineen had a fine game at full-back, while Pat Garry and John Callinan also played well in this sector. Noel Normoyle did well in the middle of the field, while up front, Michael Lineen and John Moran posed most problems for the Kilrush defence. 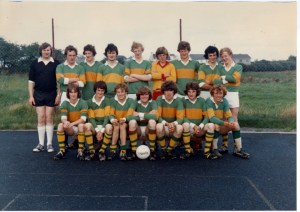 At under age level the U14 team reached the Final and were beaten by Eire Og, the U16 team got to the Semi-Final and lost out to Miltown Malbay the U12’s reached the Divisional Final.

The Senior Team did not fare well in the Cusack Cup or the Championship in 1977, however they had better luck in the Clare Shield when they defeated Kilmurry Ibrickane in the quarter-final. This was followed by a one point win over Kilkee in the semi-final on the score of 1-7 to 1-6.

Kilmihil beat Cooraclare in the final of the Clare Shield.

Martin Murphy was selected for the Clare Champion “Sportstar of the Year” Football award.

The following is the report from the Clare Champion of 31st July 1977.

“No one is more deserving of the award than Martin, who has worked so assiduously for years, for local and County football, and has always been a top grade sportsman. The fact that circumstances have denied him the medals, that usually go with the performances of the type he so consistently gives, makes this award all the more appropriate. He has played on undaunted, in the face of those near misses for Co. Championship honours, and was a stalwart in the Cusack Cup victory of a few seasons ago. He is an inspiration to the up and coming players on whom Kilmihil will be placing its hopes in the future. He has given sterling service on the County Senior Team, so maybe this award can provide the impetus to the local team, to take that coveted Senior Title in 1978. It would be the best “thank you” of all, to the man who is doing so much for the game, in the Parish and the County.”