In the first round of the Cusack Cup Kilmihil defeated Cooraclare by 0-5 to 0-1.

“Thomas Mc Mahon was undoubtedly the star of the winners side. Lining out as wing-back, he gave one of his best displays ever in the Kilmihil jersey. He received good support from John Mc Mahon, Martin Murphy & Kevin O’Halloran. Batt Crowley and Sean Murphy played well in the middle of the field, while the attack was best served by Martin Murphy, Cahermurphy, Declan Mc Namara & Noel Lorigan.”

In March Kilmihil beat Kilrush but were beaten by Shannon Gaels in April.

In June Kilmihil scored a deserving 3 point victory over Kilmurry Ibrickane and so qualified for the 1973 Cusack Cup Final.

“Tom Frawley played well between the posts for the winners, while in front of him, Liam O’Halloran, Sean Keogh, James & Thomas Mc Mahon played well. Martin Murphy had an outstanding game at mid-field and he received good support from Joe Kelly. Michael Johnston and Joe Mc Namara were the pick of the attack.

Kilmihil were short a number of regulars, including Sean Murphy, Batt Crowley and John Mc Mahon, all injured.

“The hoodoo that has attended the efforts of Kilmihil Senior footballers in competition finals was well and truly buried in the mud at Kilkee on Sunday last, when the happy-go-lucky-men of Clare Football, led by the able Martin Murphy, conquered Co. Champions Doonbeg, in brilliant fashion, to take the 1973 Cusack Cup. The Club last won this trophy in 1959, but has never won the Co. Senior Title.

However the hardy Kilmihil boys gave notice of intent, in no uncertain manner on Sunday last. In a splendid game of clean football, in which sportsmanship was always of a high order the winners gave a revealing performance. Working on the positive power being generated in its highly talented half-back and mid-field sections, the team tackled the task on hand with rare abandon. Gone was the indecisiveness and fumbling that characterised their loss in the 1972 Cup Final to the same opponents on the same pitch some weeks ago. On this occasion, strong concentrated action by a busy and resourceful forward section finally wore down the defensive power of the celebrated Magpies’ rear division. It was a victory entirely devoid of fluke. For all their greatness and splendid achievement, Doonbeg were not on par on this occasion. The winners were worthy of every point of their winning score. But let it be said for the losers that they added to their already considerable stature, by the sporting manner in which they accepted defeat. The sight of the winners being carried shoulder high from the pitch by the losers, was one to gladden the hearts of all true sportsmen, and an example which might be copied by others, to the advantage of Clare football.

Although the pitch was sodden the sun was shining. Mr. Tadhg Murphy, Chairman of the Co. Football Board, set the game in motion. Within minutes it was apparent that this Kilmihil team had entered the fray with a purpose, as it took the play into the Magpies’ territory. But two wides raised the spectre of the old Kilmihil, failing for lack of finish. However, the mobility of the forwards, led by the dashing Noel Lorigan, was obviously having an upsetting effect on the Doonbeg defences, which showed unusual perplexity in dealing with the early attacks. The first score came in the 4th minute, when Dermot O’Neill tapped a point over from a free for Kilmihil. Then Doonbeg got a grip on it for a few minutes, but a wide was all that came from the effort. By the 9th minute Kilmihil were back on top, and Batt Crowley, playing a storming game at centre, put a long free over the bar to make it 2 points to nil. But Doonbeg had not been reigning supreme in Clare football for years for nothing. With great spirit they fought back, and in the 16th minute, Griffin pointed a free. Despite a renewed Kilmihil supremacy they did not succeed in adding to their score-line, and the next point, on the 22nd minute, came from a Doonbeg free, per Senan Griffin, and put the sides level. Then the sides exchanged a series of wides before the break. By this stage, the Kilmihil pull in the half-backs and centre had become obvious, and in the second half, the winners’ forwards began punching holes in the overworked Doonbeg defence. After a spirited re-start by Doonbeg, Kilmihil were on the victory trail, and in the third minute they regained the lead, with a point from a free by Dermot O’Neill. Two minutes later, Declan Mc Namara had one from play, and three minutes later he added another. At this stage Frank Cussen came on for Kilmihil. In the 14th minute, full-forward Tom Frawley added another point from play to the Kilmihil tally. But Doonbeg, battling with typical resolution, came back for a point from play by S. Griffin. The respite was short-lived, as the winners took over once more, and by the 19th minute O’Neill had completed their tally with a further two points from play. Doonbeg rallied and made some promising attacks on the Kilmihil defence, but these held sound, and although they got one real scare, when the Magpies’ almost got through for a goal, the only consolation the losers got was a point from a free per Senan Griffin in the 24th minute, which completed the scoring.

In the final minutes it was obvious that the Cup was destined for Kilmihil, and the final whistle was a signal for frenzied elation. To quote that modern cliché – KILMIHIL HAD ARRIVED.

In presenting the trophy to Martin Murphy, Mr. Tadhg Murphy, Chairman of the Clare Football Board, said the occasion marked the end of a long period of ill-fortune for the Kilmihil team which had come very close to winning the big events time and again but had been beset by bad luck. He said that presenting the Trophy gave him special pleasure, because Kilmihil richly deserved it, and the team would prove to be a big force in the Senior Championship next year.

Kilmihil won the U14 Championship when they defeated arch rivals Kilkee in the Final on a score of:  Kilmihil 3-9 V Kilkee  0 – 5. 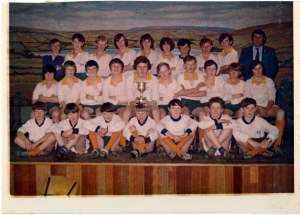 On the way to the Final Kilmihil defeated Shannon Gaels, Kilmurry Ibrickane, Kilrush and Clarecastle.

Their opponents in the Final were Kilkee and the Clare Champion report sums up a great year.

“ This was really an outstanding year for the U14 side from Kilmihil, and credit for that success must go to the dynamic Tom Downes who was in charge of the side. Indeed, between challenge and competitive games this year, the Kilmihil boys suffered only one defeat, and this incidentally, was at the hands of Kilkee, in the Final of the Listowel Football Tournament. Because of this the Kilmihil boys were wary of the Kilkee side going into the final, but ably led by mid-fielder and Captain, John Moran, they ran out deserving winners, in one of the finest games ever seen in the county. This side have been playing together for about four years in under age competitions, and they showed all the signs of a very experienced side in disposing of Kilkee in the Final. The team plays a very open style of football, and they use all the field to advantage.

Tom Hayes proved a very reliable goal-keeper, all through the year, making a number of first class saves, while at full-back Gerard Johnston showed that he has the makings of a first class full-back. He was ably supported by Michael Reidy and Michael Kelly. Noel Normoyle was a tower of strength at centre-back, while his wing-backs, Stan Lineen and Joe Daly played some first class football.

However with all due respects, their mid-fielder and Captain John Moran, was the star of the side. He is a powerful player, and scored in every game. Incidentally, John, who is at present a student in St. Flannan’s College, Ennis, has the distinction of being a member of all the College Team panels, both hurling and football, this year. He has a very capable partner in Francis Daly.

Michael Lineen, Michael Keating and John Callinan formed a real dynamic half-forward line, and laid the foundation for many of their side’s victories during the year. The full-forward line of Pat Moran, a brother of mid-fielder John, Michael O’Sullivan and Kevin Crowley were brilliant all through.

Yes indeed, this was an outstanding year for the Kilmihil U14 side and their able manager, Tom Downes, and it is to be hoped that this side will go on to bring further honors to their Club in the years ahead.”