But “Murphy Brothers” was the name on the sign last Sunday. Teddy, Sean & Martin were a brilliant trio. 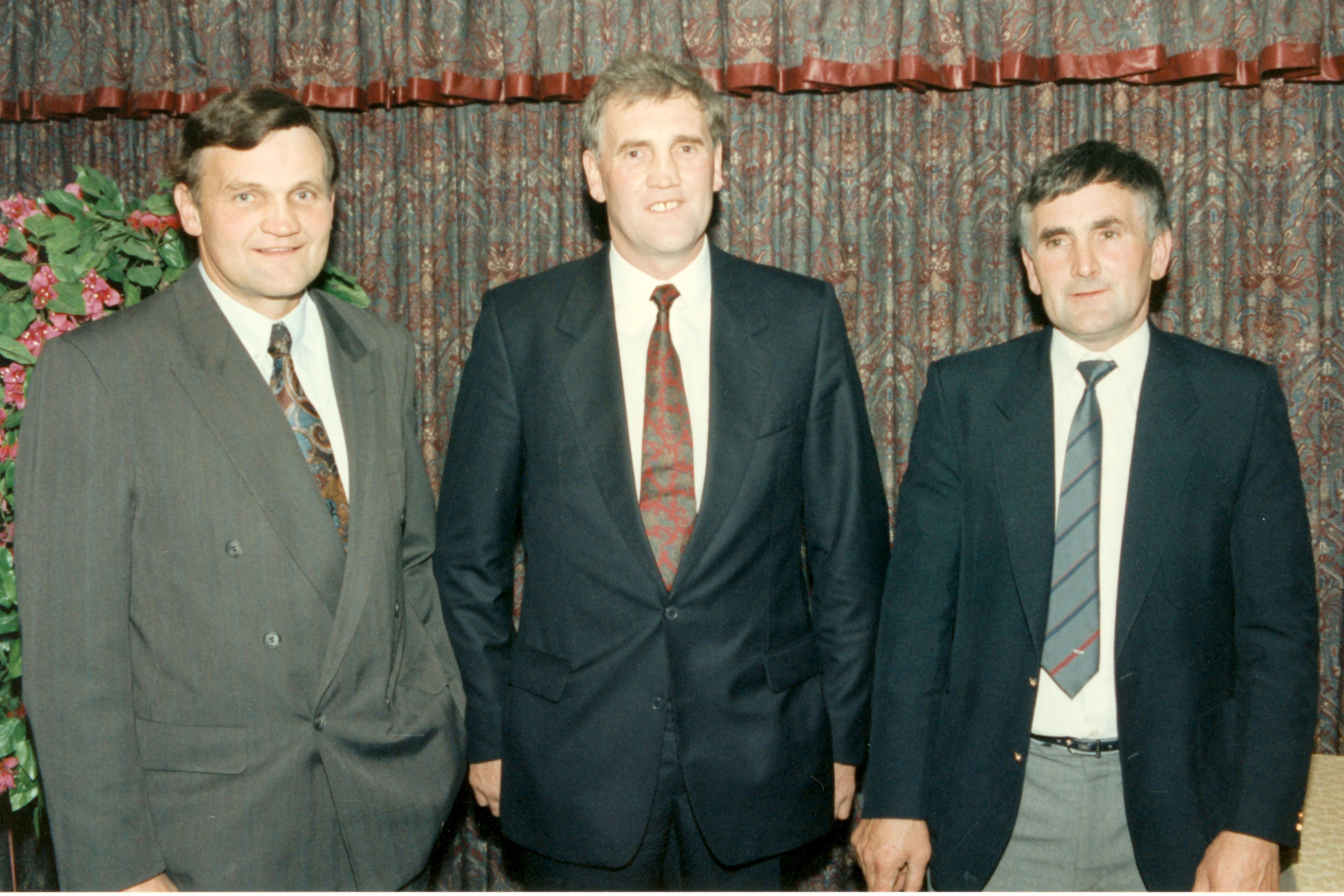 “Martin Murphy was, however, in my book, the man of the match for the Kilmihil men. Time out of number, he broke up dangerous attacks, and his long relieving clearances were the highlight of the game.   The seasoned mid-field pairing of Sean Murphy and Batt Crowley was again in top gear on Sunday. Crowley was superb in the air, while Murphy showed why he is a regular mid-field player on the Clare side with another one of his top class displays.”

“Once again, wing-back Martin Murphy, gave a brilliant display, and how the Clare selectors could have overlooked him from their National League panel is beyond me. Murphy has been the shining light in the Kilmihil team in all their games to date this year, and should be a certainty for the Clare team.”

“Kilmihil had the upper hand at mid-field, where Sean Murphy and Batt Crowley were in top form. Indeed Murphy gave another first-class display, and must surely be an automatic choice for the ‘Footballer of the Year” award. Murphy was here, there and everywhere on Sunday, and indeed, in the quarter final, as Cooraclare piled on the pressure, trying to get on level terms at least, Murphy came to Kilmihil’s rescue on many occasions, as he did in the drawn and replayed Co. Senior Football Championship Final at Kilrush recently, where he was selected “Man-of-the Match” on both occasions.”

In February 1973 Wexford played Clare in Division 2 of the National League and according to the Clare Champion report of the match: “Martin Murphy was easily the star of the Clare side, and he received tremendous support from his brother Teddy. Both these players played their hearts out, and cannot be faulted for Clare’s defeat”

Martin was selected on the Munster Panel, the first Kilmihil man since Eddie Cotter won Provincial honours in 1953. “Indeed Murphy is worthy of his inclusion in the Panel, as he had been giving first class displays all during the year. Sean Murphy, a brother of Martin’s, would more than likely, have been on the first 15, had he not been injured. It is a pity that this great Kilmihil mid-fielder is injured, because no other Clare footballer would have been more deserving of selection on the Munster Team”

Man of the Match Award

In 1972 Sean Murphy won the “Man of the Match Award” in the drawn County Final and he won it again in the replay. He won it for the third time in the 1976 County Final.

Martin won the “Man of the Match Award” in the 1974 County Final.

In the Clare Champion of 7th November 1975, there is a report of yet another honor for Teddy Murphy.

“Kilmihil’s staunch defender, Teddy Murphy, who had brought many honours to his Club and County, down through the years, has become the first ever Clareman, to be nominated for the Carroll’s All-Star Football team. Murphy, who has also made a name for himself in hurling, is nominated for the full-back position, alongside players of the calibre of John O’Keeffe, Jack Quinn, Meath, J. Brennan, Sligo, Leslie Tone of Louth. Indeed this is a tremendous achievement for the Kilmihil man, who was a member of the Munster panel last year, and actually played at corner back in the Semi-Final. Murphy was Captain of the Clare team during their tremendous run in the National League, and during that campaign, he gave many first-class displays at full-back.”

In 1977 Martin Murphy was selected on the Carroll’s All Star panel at right half back to become only the second Clareman to achieve this honor.

He was selected for the Clare Champion “Sportstar of the Year” Football award.

The following is the report from the Clare Champion of 31st July 1977.

“No one is more deserving of the award than Martin, who has worked so assiduously for years, for local and County football, and has always been a top grade sportsman. The fact that circumstances have denied him the medals, that usually go with the performances of the type he so consistently gives, makes this award all the more appropriate. He has played on undaunted, in the face of those near misses for Co. Championship honours, and was a stalwart in the Cusack Cup victory of a few seasons ago. He is an inspiration to the up and coming players on whom Kilmihil will be placing its hopes in the future. He has given sterling service on the County Senior Team, so maybe this award can provide the impetus to the local team, to take that coveted Senior Title in 1978. It would be the best “thank you” of all, to the man who is doing so much for the game, in the Parish and the County.”

1978 – Martin was selected to play for Munster.

Sean Murphy was awarded “Sportstar of the Month”