The year began with a win over Shannon Gaels in the Cusack Cup.

“The two teams were very evenly matched, as can be judged from the scoreline, and indeed Shannon Gaels could very well have been ahead at the final whistle.

Teddy Murphy was in brilliant form at centre-back for the winners, and he was well supported by his brother Martin and Dick Quinlivan, of whom a lot should be heard of in coming years. Batt Crowley and Sean Murphy played very well at mid-field, where they held the upper hand for most of the game. Crowley in particular, was in great form, and played a big part in his side’s victory. In the forward line Declan Mc Namara, Dermot O’Neill and Noel Lorigan were best.

In July 1974, Kilmihil drew with Kilmurry Ibrickane in the quarter final of the Senior Championship.

“The second half especially, produced a feast of thrills and some good football. The spectators were kept in suspense till the final whistle, as underdogs Kilmurray, almost caused the shock of the year, by taking the lead for the first and only time just 2 minutes before the end. Batt Crowley lashed over the equalizer seconds later, and both sides lived to fight another day. Kilmihil’s best player was undoubtedly wing-back Martin Murphy, and he was ably assisted in defence by his brother, Teddy and also from Tom Frawley. The old firm of Sean Murphy and Batt Crowley shaded the centre-field exchanges, with Crowley taking most of the honours. Best of the forwards were Thomas Mc Mahon, Declan Mc Namara & Cyril Considine.”

The replay was on 19th August 1974 in Doonbeg and the final score was:

“A dramatic second half recovery by Kilmihil, who had trailed a rampant Kilmurray Ibrickane by 8 points at half time saw the men in green and gold qualify for the semi final of the Co. Championship, after a thrilling and at times, tough replay. The man who sparked off the Kilmihil revival, burly P.J. Keogh, was summoned from the sub’s bench before half-time, after a frustrating first half, when he saw his side’s Championship hopes for 1974 blasted sky high, in a Kilmurray 2-3 blitz, with only a solitary point reply from Kilmihil.  The form of the Quilty men in the first half was a revelation. Eager and fit, and making no secret of their determination to win, they opened big gaps in the Kilmihil back line, as Tony Power, Martin Sexton and P.J. Power jinked their way through, for some well taken scores. Kilmihil, it is true had as much of the play, but their old bogey of wasting easy scoring opportunities was again obvious. Their 12 wides in that first half tells its own story. By contrast, Kilmurray Ibrickane, who were sharp and determined, made the most of their chances, and were well worth their 8 point interval lead. The large crowd must have given Kilmihil scarcely a chance, as the second half got under way. Indeed Kilmurray looked good for further scores, but a reshuffled and rejuvenated Kilmihil side soon gave their supporters something to cheer about, as they completely took control. A new centre pairing of Batt Crowley and Martin Murphy sent ball after ball towards the Kilmurray posts, and they were backed up by a re-cast half-back line of Declan Mc Namara, Kevin O’Halloran and Sean Murphy, who were unbeatable. The double thrust of P.J. Keogh and Dermot O’Neill in the forwards was also proving decisive, and inevitably Kilmurray cracked. This was one of the greatest fight-backs by a Kilmihil side, which looked well and truly beaten at half-time. Their savour was undoubtedly P.J. Keogh, who played a major part in two of their goals. Other Kilmihil men who were paraded  as heroes by jubilant supporters , after the game, were Dermot O’Neill, Batt Crowley, Martin Murphy, Declan Mc Namara, Teddy Murphy, Francis Normoyle and Kevin O’Halloran. Of great satisfaction to Kilmihil fans must be the fine second half performance of Sean Murphy, who reached great heights, and came right back to his best form.”

As a result of this win Kilmihil were now into the Semi-Final of the Senior Championship and their opponents were Kilrush. The final score was:

“Mid-field superiority was the key to the Kilmihil success, and here Sean Murphy gave a tremendous performance, and was ably assisted by Batt Crowley, Teddy Murphy, Declan Mc Namara and Kevin O’Halloran. Best of the oft shuffled forward section was Dermot O’Neill, with Tom Frawley having his moments.” 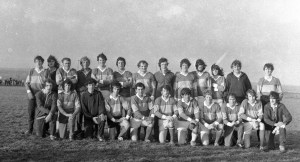 On 25th August 1974 the Senior Championship Final was played in Doonbeg between Kilmihil and Doonbeg and the game ended in a draw, 1-6 to 1-6.

“In the full-back line Teddy Murphy played well, but he had his hands full in the tall Michael Killeen. Kevin O’Halloran and Martin Murphy played well in the half-back line. At mid-field Sean Murphy had a superb first half, and his high fielding was a great treat to watch. He got good support from Batt Crowley. Francis Normoyle played well at wing-forward, while Tom Frawley did very well, when he switched to centre forward. P. J, Keogh had his best game to date in the corner, and indeed, it was his fisted point, with 6 minutes remaining, which earned them a draw. Dermot O’Neill played well at full-forward.

The replay was played at Miltown Malbay and the condition of the field was such that the game should not have been played. This accounts for the low score of 0-4 to 0-3 as the game ended with a controversial win for Doonbeg.

The Clare Champion of 20th September 1974 carried the following account of the match.

“Jubilant Doonbeg were naturally in the centre of the picture following the final whistle, but referee Jim Linnane, Quilty was by no means lost in the crowd. His decision, 4 minutes from full-time, with the sides locked at 3 points each, sent Kilmihil tempers raging. Kilmihil, again getting a grip on the game in the final 10 minutes, pressed home another attack. A high ball slipped in behind Kilmihil’s full-forward P.J. Keogh, and Doonbeg’s full-back Sean Whelan. Rampant corner-forward Noel Lorigan, who was in last to intercept, well inside the Doonbeg box, made an attempt to beat Tony Pender in the Doonbeg goal, now the only one between him and the goal. But as he attempted to kick, he was caught from behind, and the ball ran loose to goal-keeper Pender. Full forward Keogh, drew on the ball, as Pender dived for it, but at this stage, referee Linnane came racing in, indicating a free out for Doonbeg. However, he then proceeded to interview both goal umpires, and after a three to four minute get-together with them, he awarded a free to Doonbeg. The referee made this decision, even though, it is understood, both goal umpires (incidentally from Kilfenora) shared the view that Lorigan was brought down inside the area, and that Kilmihil should have been rewarded with a penalty. Kilmihil players and supporters and indeed, many neutrals, were mystified, as they saw no reason for the referee to consult the umpires, once he had indicated a free to Doonbeg.” Linnane awarded a further dubious free to Doonbeg and from the resulting clearance Doonbeg scored the winning point.

The decision of the referee, Jim Linnane caused a lot of controversy and the matter was discussed at a specially convened meeting of the Clare Football Board. The two umpires had written a letter to the Board in which they stated that they had no doubt in their minds that the referee should have awarded a penalty to Kilmihil.

Kilmihil proposed that the game be replayed and following a secret ballot, the Committee, by 18 votes to 7, decided that the game should be re-played. Doonbeg appealed the decision and the controversy continued for a number of weeks until finally the Board awarded the game to Doonbeg.

The final was played at Lahinch on 24th November between Kilmihil and Kilrush.

The game was spoiled by a gale force wind but Kilrush adapted better to the difficult conditions. This was the beginning of a new era for Kilrush, they were more eager to win and in spite of the poor conditions they played intelligent football and went on to win easily on the score of 1-9 to 0-5.

The U16 team beat Killimer, Coolmeen, Quilty & Kilkee but were beaten by  Ennistymon in the Final.