In April 1955, Kilmihil met Doonbeg in the second round of the Cusack Cup.
This was a hard fought contest with the Kilmihil defence being put under severe pressure in the first half. The half-time score was Doonbeg 0-4; Kilmihil 0-1.
Kilmihil started the second half with determination and points from Collins and Browne reduced Doonbeg’s lead to one point. Collins added two points to take the lead but Doonbeg responded with a goal from a goalmouth melee. Within a few minutes Kilmihil were back in the lead with a well taken goal by Michael Browne.
Doonbeg finished the stronger side scoring 1-1 without reply to leave the final score, Doonbeg 2-5; Kilmihil 1-5.

Kilmihil met Kilkee in the second round of the Senior Championship and had an easy win on a score of: Kilmihil 3-6 to Kilkee 1-1.

In the semi-final Kilmihil were beaten by Doonbeg.

Junior Championship
In May Kilmihil met Clondegad in the Junior Championship at Labasheeda and recorded a well deserved victory. Final score: 2-5 to 1-2.
Team: P. Quinlivan, Michael O’Grady, Michael Hayes, Dan Finucane, Joseph Finucane, Johnno Finucane, Dano Kelly, Paddy Mc Namara, Finn Callinan, Michael Currane, Michael Browne, Tom Carey, Tom Normoyle, John Lernihan and John Carmody.
The Junior Championship Final was played in September at Miltown Malbay against Ennistymon. The headline on the Clare Champion read: “Kilmihil take Junior Title”
“Kilmihil had a well earned victory over Ennistymon by 1-9 to 0-4 to take the Junior Football Championship title for 1955. The winners led at half-time by 1-4 to 0-2.
The game was well contested and bore patches of delightful football which held the interest of the spectators without reaching a very high standard. Both sides deserve full complements on a really sporting encounter which was a delight to watch. The losers fought gamely all through but never stood a chance of gaining the upper hand once Kilmihil got well into the lead.
Outstanding player of the thirty was County man Eddie Cotter of Kilmihil who gave a delightful exhibition of class football at centre-back. He was well helped on the left flank by Finn Callinan while Pat Cotter was an able full-back. The brothers Finucane at midfield held sway there, while the brothers Browne and Frank Normoyle went to make up a really good half-forward line, inside which D. Daly operated prominently.” 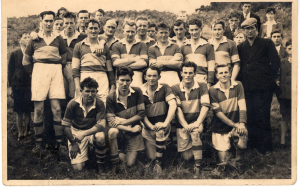