There was a rift in the Club in 1935 and because of this there were no matches played in 1936.

In 1937 a new Club was affiliated – Cahermurphy. Their first match was played in Killoury’s field in Kilmihil against Caherea, another newly affiliated Club.

Both teams were inexperienced, but under the circumstances played a very meritorious game. M. Casey was the referee. Mc Mahon, Daly, Keane, Hill & Clancy were prominent for Caherea, while for Kilmihil the “catching and kicking of Galvin” was a feature and O’Connell at full-back was impassable.

Caherea objected to this result and the teams met again.

According to the Clare Champion of 22nd May 1937, the game was eagerly awaited by the supporters of both teams. “At the start Caherea set a lively pace, and stormed their opponents’ citadel time and again, but were unable to pierce the consistent defence of Galvin, O’Connell and the goalie Cahill.“ Caherea scored a point in the first half, scored by Daly. Despite great work on the half-back line for Caherea, by the Clancy brothers, Cahermurphy were carrying the fight to their rivals territory, and one lightening attack just before half-time, resulted in a goal. The kick out was pounced upon by Melican, who added a further point, leaving the half-time score:  Cahermurphy 1-1     Caherea 0-1

On the resumption, Cahermurphy assisted by a slight breeze, were more than confident of success, but Caherea youths again raided their opponents’ territory, where Galvin again refused to be beaten. The ball travelled down to centre-field, where Keane and Cleary showed their superiority over Reidy and Mc Guane. Caherea were awarded a free, and Mc Mahon sent the ball well into the square, where Daly rasped to the met. The Caherea supporters shouted themselves hoarse, but Cahermurphy were awarded two 50’s in quick succession, which proved fruitless. The final whistle left Cahermurphy attacking, but they could not score the equalising point, as their crafty opponents showed an advantage in speed and dash.”

Throughout 1937 Kilmihil and Cahermurphy continued to play in different competitions. 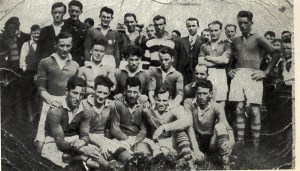 In the Clare Champion of 11th September there is a report of that match:-

“Before a very large crowd at Cooraclare, Kilmihil met and defeated Kilballyowen in the final of the Junior Championship Grade A. Kilmihil’s victory is all the more creditable when it is taken into consideration that the club there is only a short time re-organised. A special word of praise is due to Bill Cunningham for his efforts in this respect. His team played a great game against Kilballyowen – fast football and good overhead catching being outstanding features. Mickie Devine and Bill Cunningham played an excellent game all through the hour. T.J. Enright, Michael O’Donoghue, Timmy Ryan, Joe Leary and Micko Downes were also outstanding players.  The back line put in a fine defense, and with a few changes here and there, Kilmihil should possess a useful team next season”