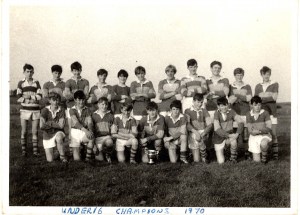 Kilmihil won the U16 Football Championship for the first time in 1970.

The opening championship game was against Lissycasey and the game was played at Cooraclare. Kilmihil were by far the better team and ran out comfortable winners on a score of 7-10 to 2-2.

Our next opponents were Cooraclare and again Kilmihil were far superior with the  final score of 5-9 to 2-2.

Kilmihil were now favourites to win the championship and were somewhat complacent going into the semi-final. Doonbeg took advantage and led at half-time on a score of Doonbeg 0-7   Kilmihil 0-1.

Needless to say the lads got a dressing down at half time and emerged in a more determined and focused frame of mind for the second half. Kilmihil scored 1-4 to Doonbeg’s 1 point to level the match at 1-5 to 0–8 at full time.

In the replay Kilmihil dominated throughout and ran out easy winners.

The Final was played in Miltown Malbay and the opposition was Liscannor/Lahinch/Ennistymon combination  – St. Bridget’s

“Play was held up for some minutes near the end of the game when spectators invaded the pitch. But the encroachment did not stop Kilmihil from winning their first ever U16 Championship, when they scored a well deserved 1-8 to 2-2 win over St. Bridget’s Liscannor, at Miltown Malbay on Friday evening last. Kilmihil were on top all through, and a St. Bridget’s goal, almost on the stroke of full-time, helped to put a  respectable look on the scoreboard. Kilmihil opened the scoring when Dick Quinlivan scored a great point from about 50 yards. The same player added another point two minutes later, when he first-timed a weak clearance by St. Bridget’s defence, over the bar. This gave Kilmihil 2 points to nil lead, after 15 minutes of the first half.

St Bridget’s hit back with a goal at this stage, but Martin Murphy equalised a few minutes later with a point from a 14 yards free. Cyril Considine put Kilmihil in the lead, about 5 minutes before the interval with a well taken goal.  The half-time score was 1-3 to 0-3 in favour of Kilmihil.

Kilmihil scored 4 points in the first ten minutes of the second half, to give them a lead of 7 points. St. Bridget’s replied with 2 points but Kilmihil came back to score another well taken point. At this stage the game was held up for about 10 minutes. With about 2 minutes to go, St. Bridget’s were awarded a 14 yards free, from which they scored a goal, but Kilmihil were on top at this stage, and ran out deserving winners.

Kilmihil had their best players in Martin Mangan and Joe Kelly in defence, Cyril Considine and Flan Glynn were always on top in the middle of the field, while Dick Quinlivan and Michael Johnston were best in attack.”

There was great rivalry between Kilmihil and Shannon Gaels in the early 1970’s and whenever they met they drew a large following. A number of Shannon Gaels supporters used to patronise the Pubs in Kilmihil and prior to matches there was a lot of banter with the locals, often leading to some heavy betting between the rivals.

On 5th July 1970 Kilmihil were defeated by Shannon Gaels in the quarter final of the Senior Championship by 2-4 to 0-7. Batt Crowley & Sean Murphy dominated mid-field however the forwards failed to take advantage of the numerous chances that came their way and ultimately paid the price loosing by three points.

In the Cusack Cup competition however, they fared much better as per the following results:

Batt Crowley, Paudie Halpin and the Murphy brothers, Teddy, Sean & Martin were prominent in these victories.

They met Shannon Gaels in the quarter final but this time the score was :-

“Brilliant individual performances by Teddy Murphy at full-back, and his brother Martin at corner-forward, were the highlights of Kilmihil’s well-deserved win over Miltown Malbay, in the Cusack Cup Semi-Final, which produced little or no good football, at Cooraclare on Sunday last.”

“Doonbeg and Kilmihil must meet again, draw was a fair result.

Doonbeg had the advantage of a slight breeze in the first half, and though the exchanges were relatively even, the Magpies led at the interval by 1-3 to 0-4.

The second half was a ding-dong struggle , with Doonbeg forcing the early play, and a rather simple goal after 15 minutes seemed to seal the issue for Doonbeg. However, Kilmihil bounced back into the reckoning, with a Cyril Considine goal five minutes later, and from then on the game was back in the melting pot. The same player had the ball in the net less than a minute later, but the referee called back play, and awarded a free to Doonbeg, for a foul on the goalkeeper, even though the ball had crossed the goal-line.  Both sets of defence were found wanting in the early stages. A peculiar feature of the game was the total eclipse of Senan Downes, James Lynch and Michael Haugh in the rearguard. Kilmihil too had their worries at the back, and it was as a result of this that Doonbeg opened the scoring after two minutes, with a pointed free by Pat Cotter. Doonbeg enjoyed supremacy at mid-field in the early stages, but Sean Murphy and Batt Crowley rallied Kilmihil, who hit back with 2 points from Martin Murphy and Paudie Halpin, who flew home from U.S.A. specially for the game.

Henry Sheehan at wing-back was undoubtedly the star of the Kilmihil defence. He received good support from Teddy Murphy at full-back, and Kevin O’Halloran at centre-back. Sean Murphy tried hard at centre-field while the attack was best served by Paudie Halpin, until he retired injured, Martin Murphy, Francis Cussen and Cyril Considine.

“Historic four in a row for Doonbeg.

In a drab featureless game at Lahinch on Sunday, Doonbeg made football history, by winning their fourth Cusack Cup Clare Senior Football League Final in a row, when

they defeated Kilmihil by 3 points, at the second attempt, after the teams had drawn three weeks previously at Cooraclare. Neither team produced the same standard of football as in the drawn game, and seven of the eleven points scored on Sunday came from placed balls. Doonbeg sealed the issue in the opening three minutes of the second half, when they had as many points, without reply from Kilmihil. The losers were then awarded a penalty, with two minutes to go, but corner-forward, Martin Murphy, sent the ball straight into the goalkeepers hands.

Doonbeg won the toss, and elected to play with the breeze in the first half. Kilmihil were the first to score, with a point from Batt Crowley after only one minute. Michael Igoe equalled for Doonbeg in the 4th minute, when he pointed a 50, bur Francis Cussen put Kilmihil in the lead again, one minute later, when he kicked over a point, after some great work by Paudie Halpin. Michael Igoe again equalised from a free for Doonbeg in the 13th minute, after he had missed a 14 yards free.“

Doonbeg led at half-time 0-4 to 0-2. Doonbeg hit their best form in the opening three minutes of the second half when they scored three points. Kilmihil fought back with 2 points from Paudie Halpin and with two minutes to go Kilmihil were awarded a penalty. However Martin Murphy’s shot was saved and Doonbeg won by three points.

“Teddy Murphy at full-back, turned in yet another brilliant performance for Kilmihil, and he got good support from Kevin O’Halloran and Henry Sheehan. Sean Murphy and Batt Crowley played well at mid-field, especially in the early stages of the game. Paudie Halpin was the best of the Kilmihil forwards and to a lesser extent Cyril Considine and Martin Murphy.”