In 1984 the Gaelic Athletic Association was 100 years old and to mark the occasion the County Senior and Minor Football finals were set for Carron, the birthplace of Michael Cusack. This was a tribute, not only to Michael Cusack, but also to the men of Carron, who saw to it that Glean Ciosoig would be a fitting memorial to their most illustrious and famous son.

1984 was a busy year for Kilmihil G.A.A. Club, starting on 25th March with the first round of the Cusack Cup defeating Michael Cusack’s on a score of 1-5 to 0-4 at Lahinch.

In the second round Kilmihil had a comprehensive win over Kilmurry Ibrickane with a final score of 4-9 to 1-5. Kilmihil totally dominated the first half and led at the interval 3-7 to nil following goals from Noel Normoyle, Padraic Cotter and John Browne, and a number of good points from Colm Collins. Early in the second half Tommy Power scored two points and Hickey added a goal. However, Kilmihil who were in control at mid-field, thanks to Michael Keating and Joe Kelly, replied with a goal from Noel Normoyle and ran out easy winners in the end.

In May Kilmihil met Kilkee in the Cusack Cup and though Kilmihil were leading by 4 points with 5 minutes remaining Kilkee fought back and scored a goal in the closing minutes to level the match.

On 21st October 1984 Kilmihil played Miltown Malbay in the semi-final of the Cusack Cup. Having played with a strong wind advantage in the first half Kilmihil led at half time by 4 points to 3. Miltown dominated the second half and won on a score of 1-5 to 0-4.

In the Senior Championship Quarter-Final Kilmihil beat Cooraclare by 0-12 to 1-6.

“In contrast with the comparative composure of the Kilmihil defence, there was a tendency to over indulge in fouling by the Cooraclare back-line, a pursuit that was to have dire consequences for them, with the accurate Colm Collins and Padraic Cotter only too glad to punish this hastiness. John Moran, Michael Garvey, Stan Lineen & Martin Murphy served Kilmihil excellently in defence, and Sean Murphy, though not back to full fitness, provided leadership and authority in the centre of the field. Colm Collins, Kieran Normoyle, Pat Garry and Michael Keating were the best of a cohesive attack, and the accurate boots of Colm Collins and Padraic Cotter played a major role in Kilmihil’s victory.”

Kilmihil were drawn against the old enemy Doonbeg in the Senior Championship Semi-Final for the second year in succession. Over the years Kilmihil and Doonbeg fought out many contests and usually only a few points separated the sides. However in the Semi-Final in 1983 Doonbeg inflicted a heavy defeat, 1-9 to 3 points. Twelve months later and Kilmihil were psyched up for revenge.

“A minute into the game, and playing into a strong breeze, the challengers were a goal ahead. A great start indeed, and the gauntlet firmly thrown down to Doonbeg, They came back with a point but then the flood gates opened. Padraic Cotter, who had scored the first goal, placed Pat Garry for goal number two, and with the Kilmihil cheers ringing in their ears, the Doonbeg bastion was breached for the third time.

Two goals in as many minutes, Cotter adding the third. If any team could recover from such a set back, it must be Doonbeg. Time was still on their side. Over 50 minutes still remained, but so determined were Kilmihil, so composed was their play, and so solid was their defence, that Doonbeg for all their endeavour, could not make the impact they needed so much. One golden opportunity did present itself in the 11th minute, when a Gerry Killeen free hit the upright and the ball came back to Tommy Tubridy, who blazes wide. The Magpies did come back for two quick points from Killeen and Tubridy, and some strong pressure on the Kilmihil defence forced the Kilmihil mentors to switch Stan Lineen from centre to full-back, a move that paid off well. With the half-back line totally snuffing out the Doonbeg challenge, the work rate of Sean Murphy and Noel Normoyle at mid-field saw the fast and elusive Kilmihil attack move into gear again. Padraic Cotter had another goal after 20 minutes, but this was not allowed because of a square infringement. However, four minutes later, Kieran Normoyle shot home a brilliant goal, and at the interval it was 4-3 to 0-5 in favour of the challengers.

For the second half Doonbeg introduced Gerry and Jimmy Mc Inerney, to the exclusion of Sean Doyle and John Killeen. Sean Cotter went to full-back, and Timmy Killeen partnered Pete Dillon at mid-field, with Pat Blake dropping back to the half-back line. Obviously a desperate position demanded desperate remedies, but Kilmihil were not to be denied, and when Noel Normoyle lofted over a point a minute into the second half, the Kilmihil march was on again. A sense of frustration set in with Doonbeg. Goals seemed to be their prime consideration, but the steadiness of the Kilmihil defence put paid to such an exercise. Gerry Killeen pointed a free in the 36th minute, and the tempo of the game slowed down considerably, as an air of inevitability entered the proceedings. Tackling became rather hard, and at times crude, and when Gerry Killeen was side-lined on the three-quarter hour mark, for felling Martin Murphy, Doonbeg’s day of woe was compounded.

After Kieran Normoyle had sent over another point, a Doonbeg attack was rewarded with Pete Dillon punching home a goal. However Kilmihil were quickly back for Thomas Egan to point. Timmy Killeen and Thomas Egan swapped points to leave a handsome three goals between the sides when Paddy Keane sounded the final whistle.

Obviously Kilmihil approached this game in a very determined mood. In every sector they were superior. They were faster, fitter and more eager, and with the cushion of those early goals, were able to settle in, and demonstrate their own special brand of open, attractive football. Each defender played his heart out, each totally committed to his task, and here, this steadiness was personified in the displays of Pat Pender, Stan Lineen and John Hayes. Both Sean Murphy and Noel Normoyle contributed handsomely to the success, through their ability to offset anything Doonbeg could offer at mid-field. Farther in, Man-of-the-Match, Padraic Cotter, was in devastating form, and it was a particularly happy occasion for young Thomas Egan, who, on the wing, fielded magnificently, and scored 2 great points. Kieran Normoyle and Pat Garry always threatened, and with good success, but overall, there was a cohesion in the Kilmihil attack to which Doonbeg had no answer.”

The 1984 County Finals were played in Carron and Kilmihil supporters travelled to Carron with great expectations to compete in both the Minor and Senior finals.

The Minors had a very successful year until they came to the final hurdle. On the way they accounted for Cooraclare, Kilkee, Doonbeg & St. Breckan’s and faced Kilrush in the Final.

Kilrush were going for three in a row and unfortunately it wasn’t our day with Kilrush emerging victorious in a tight contest by a point, 2-5 to 1-7. Kilmihil took an early lead leading 0- 3 to o- 1 after 10 minutes when wing forward Martin Cusack scored a goal for Kilrush. In the second half when the sides were level Cusack again popped over 2 points. Thomas Egan pulled one back and in spite of the intense pressure the Kilrush defence held out to win by the narrowest of margins. 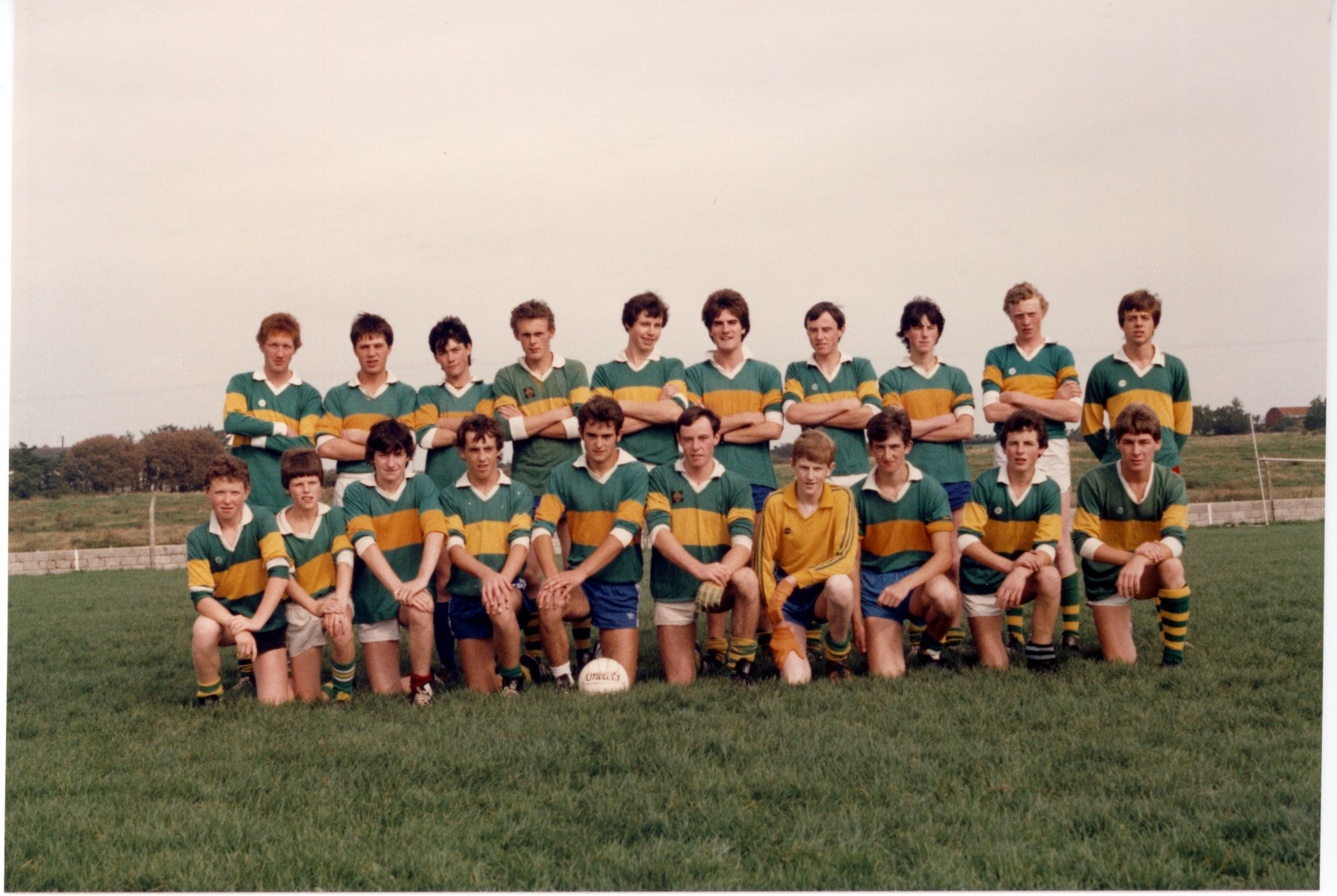 Kilkee who last won the Senior Championship in 1942 were our opponents in Carron.

The game was played in poor conditions, very windy and showery and the greasy conditions were not conducive to good football. The performance from Kilmihil was very poor in stark contrast to their performance in the Semi Final. Kilkee on the other hand dominated in defence and never allowed the Kilmihil forwards to make any impression. Noel Roche & Michael Mc Carthy dominated the half back line while providing support to their forward line and in the end they ran out comfortable winners with a five point margin.

In the Intermediate Championship Kilmihil lost out to Clarecastle in the Semi Final replay. Final Score: Clarecastle 1-08  Kilmihil 0-10.