Being consigned to Intermediate level did not sit well with many in the club and it was generally agreed that a greater effort would be required if we were to win the Championship and get back to Senior status. Pat Garry was appointed as team manager and set about improving the training regime and in this regard he brought in Cian O’Neill to coach the team. The single biggest challenge was to instil confidence into a team totally lacking in self belief as a result of years of defeat. Pat demanded more commitment from the players and a greater effort was made than in previous years in preparation for the championship.

The first round was played at Cooraclare against Clondegad on 10th July. Clondegad got off to a good start and led at half time 1-6 to 0-3.  Mark O’Connell, Timmy Ryan and Declan Downes led the comeback and gradually they narrowed the gap and by the end of the third quarter the sides were level. Two injury time points gave Kilmihil victory on the score of 0-13 to 1-8.

The second round was played on 31st July at Miltown Malbay against Michael Cusack’s. Declan Downes scored the first point and Cusack’s replied with two. Timmy Ryan added two more and just before half time Mark O’Connell gave Kilmihil a two point advantage at the break. Dermot Haugh and Paul Reidy stretched the lead to four points early in the second half. Cusack’s pressed hard forcing Declan O’Halloran to make a brilliant save before finally scoring a goal in the 41st minute.   Both sides only managed one point each in the remaining 19 minutes before Shane Egan sealed victory with an injury time goal.

The final game in the division was against Corofin and this proved to be a one sided affair which ended 1-10 to 0-2.

Having won all three games we qualified for a semi-final meeting with Clooney-Quin at Cusack Park on 23rd September. Kilmihil dominated the first half and led at one stage by eight points however Clooney-Quin finished the half with three points to leave the score at 1-6 to 0-4 at the break. Kilmihil increased the lead with two points in the second half but Clooney-Quin fought back and reduced the margin to three by the end of the third quarter. They continued to dominate and forced Declan O’Halloran to bring off a brilliant save to deny them an equalising goal but they kept pressing and managed to reduce the margin to two. At this stage the selectors made a tactical switch which resulted in six unanswered points, three from Declan Downes and one each from David Ryan, Philip Ryan and Shane Egan thus securing a place in the final.

After so many barren years there was an air of cautious anticipation in Kilmihil leading up to the Intermediate Championship Final and a large contingent travelled to Quilty on 9th October hoping that we would get the better of Ennistymon and return to Senior status. Having won the toss Kilmihil opted to play against a stiff breeze and after ten minutes it looked like the right decision as the sides were level at one point each. Then however a good movement from Ennistymon ended with a goal and two minutes later they scored a second. They continued to dominate and the game was as good as over when the half time whistle sounded when they led 2-5 to 0-1. Ten minutes into the second half disaster struck when Thomas Coughlan suffered a serious leg injury which held up play for approx 10 minutes. When play resumed Kilmihil tried hard to get back into the game. With a 10 point deficit to make up we needed goals however Ennistymon defended in numbers and made the forwards work hard for every point. Thomas Coughlan’s injury was a major upset for all concerned but in spite of this the lads continued to the final whistle but to no avail.

There was some consolation at the end of the football season when we captured the U21B Championship, it helped to make up for the disappointment of loosing the Intermediate Final and provided hope for the future.

Paul Reidy played the captains part and got the opening point however Newmarket on Fergus replied with a goal. Kilmihil recovered and were level at half time 0-5 to 1-2.

The game ebbed and flowed and Newmarket had a one point advantage heading into the final quarter but by this stage Kilmihil were displaying the greater hunger. They fought for every ball and put the Newmarket defence under sever pressure. Points from Paul Reidy, James Egan, Cathal Daly and Colm O’Gorman gave Kilmihil a three point lead heading into the last ten minutes. Substitute Shane Egan put the game beyond doubt when he scored a goal to give Kilmihil a 5 point lead in the final minutes of the game. 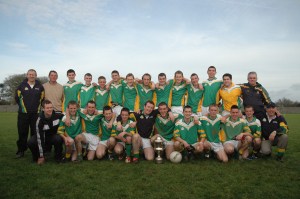