With Shane Mangan dominating mid-field Kilmihil led at half time by 0-5 to 0-2 but should have been further ahead following a missed penalty which was just inches wide of the target. Kilrush dominated the second half and took a one point lead however the crucial score came when substitute David Lorigan finished a high centre to the net. Kilrush pressed hard but their efforts only yielded a single point as the Kilmihil defence held solid and Kilmihil held on to win by a point. 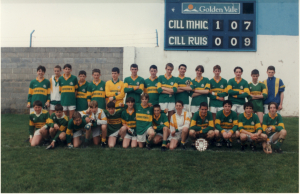 Kilrush got their revenge on Kilmihil when the sides met in the Semi-Final of the 16A Championship and ran out easy winners on the score of 5-8 to 1-5.

The Minors reached the Semi-Final.

Kilmihil met Kilkee in the first round of the Senior Championship on 16th August 1997 at Cooraclare. Kilmihil led briefly but once Kilkee settled they took control and Kilmihil were playing catch up for the rest of the game.