In June 1980 the Senior Championship got off to a great start with a one point victory over Kilkee. Final Score: Kilmihil 1-4  Kilkee 0-6

This was a tough contest with tight marking and low scoring and although Kilmihil were the better team with most of the play they were unable to convert this into scores. The decisive moment in the game came with five minutes to go when Michael Lineen scored a goal to give Kilmihil a two point lead. Kilkee fought back with a point but were unable to get on top.

“Teddy Murphy had a tremendous game, at full-back for Kilmihil, while Joe Kelly did very well between the posts bringing off  a couple of fine saves. The half back trio of Declan Mc Namara, Pat Garry and Martin Murphy was very solid throughout. Up front, Colm Collins and Michael Lineen were best.”

In the second round Kilmihil met St. Breckan’s and had an easy win.

On 31st August 1980, Kilmihil played Kilrush in the Semi-Final and finally brought their reign to an end with a comprehensive victory.

Kilmihil took control of this game right from the start with a point from Noel Normoyle after only 20 seconds and he followed this with a goal shortly after. While Kilmihil dominated throughout the field they missed a number of scoring chances and at half time led by 1-3 to 1-2.

With the wind behind them in the second half and with Sean Murphy dominating mid field the Kilmihil forwards scored 8 points while Kilrush could only manage 1. 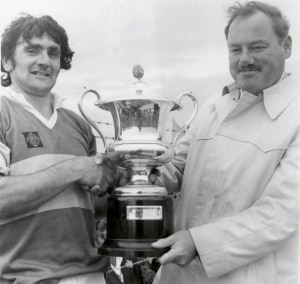 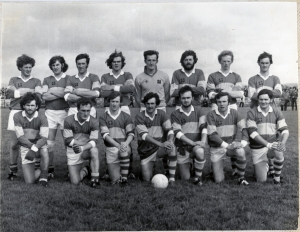 The headline on the Clare Champion of Friday 19th September 1980 read as follows:

“Triumphant Kilmihil come in from the cold”

Kilmihil come close to winning the Senior Championship on so many occasions over the years. In 1900 we competed in our first County Final and lost to Labasheeda, we reached the County Final in 1958 which was played in Kilmihil but nevertheless we were beaten by Kilrush. Our next final appearance was in 1968 when we lost to Doonbeg.  We lost the finals of 1972 and 1974 to Doonbeg after replays.  In 1976 we were beaten by Kilrush in the final.

In 1979 we beat the reigning Champions Kilrush in the first round of the Championship however they came back through the losers group to beat us in the semi-final by one point.

When we arrived in Doonbeg on 14th September 1980 to play Doonbeg in the County Final there was an air of confidence among the players that our time had finally come to make the breakthrough. Seven members of the team were on the Clare U21 team that year and they brought a new level of confidence and expectation.

“Aided by a strong first half wind and getting quite a sizeable share of the midfield play Doonbeg hadn’t the finishing touches that mattered. Kilmihil forwards Colm Collins, Francis Normoyle and Francis Cussen combined in a delightful move to let Cussen through for the only goal of the game. It was a bad blow to Doonbeg who recovered to take a point lead at half time, 0-4 to 1-0 but the writing was surely on the wall, as the second half proved.

The younger, more mobile Kilmihil lads who for so long in the first half were the pupils now became the masters and regained much of the supremacy at midfield which they had lost in the opening moiety, they proceeded to nail the Doonbeg challenge into the ground, so much so that the home side could only manage one point in the half hour, and that coming four minutes from time.

Each member of the Kilmihil side played his part in fashioning this historic victory. Joe Kelly in goal, received excellent cover, and dealt admirably with the shots that came his way. John Moran, Teddy Murphy and Stan Lineen had far too much scope all through, from a disappointing Doonbeg full-forward line, and Lineen, as against Kilrush, showed what a fine attacking defender he is, Pat Garry was expected to be severely tested by Tommy Tubridy, but the Doonbeg man could make little or no impression against him. On the wings Declan Mc Namara and Martin Murphy tackled tigerishly, and with great success, and it is a tribute to the entire defence and its unyielding spirit, that Doonbeg could only manage 2 points from play, in the hour.

The Sean Murphy/Michael Keating partnership came into its own in the second half.

Five of the Kilmihil forwards got on the score sheet, and the odd man out, Francis Normoyle had a vital role to play in the game’s only goal. Here Noel Normoyle was a ton of inspiration, and Michael Garvey and Francis Cussen worked with great success and accomplishment. Colm Collins too, and Michael Lineen, came more into the game in the second half, and both took some grand points.”

After the match Jack Daly presented the cup to Martin Murphy Captain of the victorious Kilmihil team who made history in winning the first Senior Football Championship.

The break-through in winning the Senior Championship brought unprecedented scenes of joy as faithful supporters gathered to welcome home their heroes.

Bonfires blazed as Martin Murphy led his team back to the village where they were formally welcomed home by the Chairman of the Club, Michael Griffin. Other speakers included Team Manager, Pat Maguire, Selector, Tom Downes, Board Delegate, Danno Kelly and team Captain, Martin Murphy.

In the first round of the U21A championship Kilmihil had two points to spare over Kilkee. The game was played at Miltown Malbay and the score was Kilmihil 3-4  Kilkee 0-11.

In the second round played in Doonbeg they beat Miltown Malbay.

The Semi Final was in Lahinch where they beat Eire Og.

Kilmihil were due to play Ennistymon in the U21 Final in October 1980, however Ennistymon made a somewhat unreasonable request to defer the Final to the following March and the outcome was that Kilmihil were awarded the Title.