The headline on the Clare Champion report on 20th November 1987 read as follows:

”To be a cold, dispassionate match reporter in Cusack Park on Sunday wasn’t easy.

Such was the performance of Kilmihil and Cooraclare in the U21 A football final, such was the exemplary sportsmanship displayed, the commitment from all players, the excitement of a great occasion, the very high standard of performance and a heart throbbing finale, that one had to become immersed in the proceedings and in the end, breathe a sigh of gratitude that football is alive and well, at least in these two great clubs.

It was certainly a case of keeping the good wine till the end of the season and while the end result was a win for Kilmihil, excellently fashioned and engineered by two first half goals from young full forward Gerry O’Grady, the lasting memory one will have taken away is that of a memorable match, full of all that we thought was a thing of the past in Gaelic football.”                                  Report by Gerry Slevin

Cooraclare went into this final as reigning champions and were fancied to retain their crown however Kilmihil had other ideas.  Kilmihil took the game to Cooraclare and totally dominated the early exchanged ending the first half on a score of:

However Cooraclare came out in the second half determined to make a game of it and by the end of the third quarter the score was 2 – 5 to 0 – 5. Cooraclare continued to exert pressure and scored two further points before Kilmihil responded with a goal from Pat Quinlivan. To their credit Cooraclare did not give up and continued to exert pressure on the Kilmihil defence and were rewarded with a goal and a point but Kilmihil held out to win by three points.

Kilmihil’s top scorer on the day was Gerry O’Grady with two goals and 1 point (free). 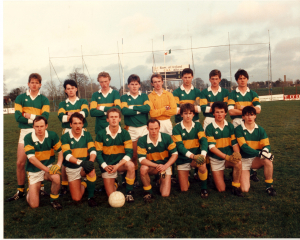