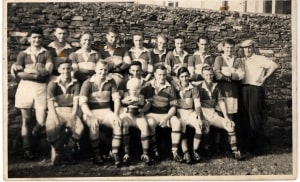 1959 – Kilmihil win the Cusack Cup for the first time.

In March 1959 the first round of the Cusack Cup took place at Clarecastle, between Clarecastle and Kilmihil. The match ended in a draw and produced some first-class football. The prominent members of the Kilmihil team were Eddie Cotter, Pat Galvin, Sean Duggan and Michael Browne.

Kilmihil next met Kildysart and proved themselves to be superior to Kildysart in all phases of the play.

In June 1959 Kilmihil reached the semi-final in which they beat Cooraclare by 5 points. The match was played in Kilmihil in torrential rain.

“Both teams had their stars, Kilmihil’s man of the match was undoubtedly centre half-back Cotter, who did a tremendous amount of work, and did it well. His long raking clearances went a long way towards the winning of the match, and his catching of the greasy ball was a joy to watch. Carmody in goal for the winners was very sound, and made a number of good saves under pressure. Full-back, Duggan also had a good game, while the second half display of the other backs, M. O’Grady, P. Cotter, J. Finucane and S. Currane was good”

The 13th September 1959 was a very big day in the history of the Kilmihil Club, not only because of the opening of the Park, but also on that day they won the Cusack Cup, and defeated their old rivals Kilrush. The Clare Champion of 19th September has this to say about the game:-

“This has been a season of upsets and surprise results in Clare Football circles, and last Sunday there was another surprise at St. Michael’s Park, Kilmihil, when the local side humbled Kilrush Shamrocks, who have been tops in all Senior competitions in recent years, when they beat them by 2-6 to 0-4, in the Final of the Cusack Cup Competition. THIS WAS KILMIHIL’S FIRST TIME TO CAPTURE THIS COVETED TROPHY, AND THE VICTORY CAUSED GREAT REJOICING BY LOCAL GAELS. Kilmihil fully deserved to win. They were the better team for most of the hour, and the Shamrocks had no answer to their speedy thrusts goalwards on many occasions. The locals played with rare determination for 60 minutes, under a broiling sun. When the end came they were chaired off the field by excited and jubilant supporters. About 3000 people watched the game, and even the most rabid Kilrush supporter admitted afterwards that they were beaten by a fitter and better team on the day. Kilrush F.C.A. band played the teams on to the field, and then played the National Anthem at the start. The Shamrocks never seemed to get their scoring machines going, and on many occasions they became a ragged looking side, with a defence which became spread-eagled, far too often, with the result that Kilmihil got the scores, and the two vital goals, to win the Cup.”

Football was very much a physical game in the old days and tactics were very basic. In the words of the song written to commemorate the Cusack Cup victory “they played catch and kick football”. High fielding was a feature of the game and it was common practice to lob the ball into the square whereupon the forwards would charge in on the goalkeeper. The role of the backs was as much to protect the goalkeeper as to clear the ball. John Carmody was a formidable goalkeeper and he had his own way of dealing with forwards, particularly ones who dared to take him on.  Paddy Cotter recalled that on occasion John would issue instructions to the backs to “let him in to me” Usually this resulted in the forward having to be carried out and very few dared to take him on a second time. The football in those days was made of raw leather laced at the top and contained an inflated pigs bladder. When dry it was sometimes difficult to direct and when wet it became greasy and difficult to hold and weighed twice as much as when dry.